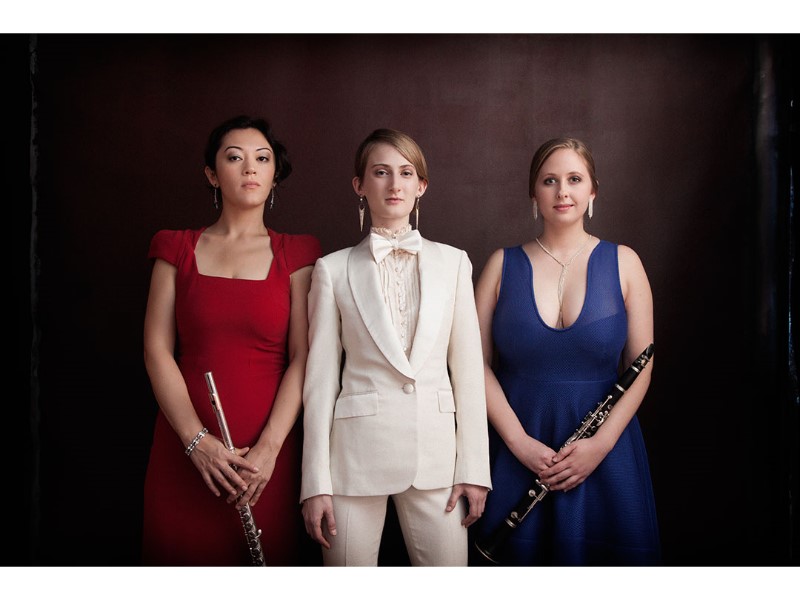 Parhelion Trio will be performing classic works by Debussy and Saint-Saens alongside exciting and beautiful contemporary originals written for the trio by Daniel Weymouth, Wendy Griffiths, Sunny Knable, and Daniel Felsenfeld. The concert will feature a WORLD premiere of ‘Rhapsody’—a romantic Rachmaninoff-influenced tour de force ending with a rousing tarantella—written for the trio by Peter Winkler.  (parheliontrio.com)

Praised by The Strad magazine for their “effervescent” playing, Parhelion Trio – Sarah Carrier (flute), Ashleé Miller (clarinet), and Andrea Christie (piano) – is a New York City-based ensemble dedicated to bringing virtuosic, robust, and impactful contemporary music to diverse audiences.  The Trio has performed at Carnegie Hall, The Royal Danish Academy of Music in Copenhagen, and in The Metropolitan Museum of Art’s “ETHEL and Friends” Series. Parhelion is also the recipient of a 2018 New Music USA grant for their upcoming project Dark Matter: A Tribute to Vera Rubin, inspired by the life and work of the late astrophysicist.

It’s been said that Sarah Carrier combines “thoughtful musicality with virtuosity in her alternately energetic and delicate account of a flute line laden with light multiphonics and unusual timbres” [New York Times; Kozinn].  Ashleé Miller, has been praised for her rich “color and imagination” [NPR]. And pianist Andrea Christie is a versatile performing artist with a flair for late-romantic works and a passion for contemporary music.

The three formed the Parhelion Trio in 2010 at the Institute and Festival for Contemporary Performance at Mannes College The New School for Music.  Together, they were a semi-finalist in the inaugural M-Prize International Chamber Music Competition, the largest chamber competition in the world, and were offered a one-year management prize.

Le Petit Salon de Musique is honored to offer our audience a chance to see Parhelion Trio performing some of the world’s most beautiful music in an intimate and accessible setting.